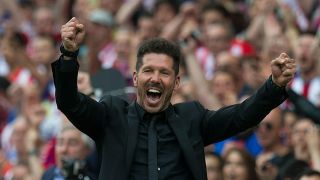 Diego Simeone confirmed he will stay on as Atletico Madrid head coach after the club bode farewell to the Vicente Calderon with a 3-1 win over Athletic Bilbao.

Simeone's future with Atleti, who he has led with considerable success since 2012, has been a matter of speculation throughout the season after he negotiated a reduction in the length of his contract following last year's penalty shootout loss to Real Madrid in the Champions League final.

His deal now expires next June after having two years trimmed off but the 2013-14 LaLiga title winner intends to be in the dugout when Atleti open the Wanda Metropolitano Stadium next term.

"I am staying here," he told a post-match news conference after a brace from Fernando Torres and a late Angel Correa effort sealed the points.

"I am going to stay because this club has a future and the future is all of us together."

"We are finishing the season now, and for sure on Monday we will meet with Miguel, Andrea, to discuss what could be waiting for us in the future.

"Obviously we will look for the best for the club and for everyone. We will speak about the growth for our future. The base is there, solid, with six years competing in an extraordinary way. The tremendous stadium we enter in September will make further demands, we all need to take another step to match it."