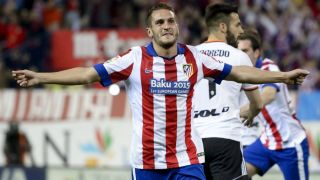 Koke-less Atletico lost 1-0 to Bayer in Germany in February, but the 15-time Spain international is fit again - having appeared in La Liga three times since overcoming a hamstring injury.

The 23-year-old has scored Atletico's only goal in their past four outings in all competitions, with the Spanish champions' title defence waning - they are nine points adrift of leaders Barcelona.

Simeone said the re-introduction of Koke should help Atletico's bid to end their scoreless run in European competition, as they have been goalless in their past 215 Champions League minutes.

"From a football point of view, Koke is possibly one of the midfielders that reads the game best, especially because he can play different positions in the midfield," Simeone said, ahead of the crucial fixture at the Vicente Calderon on Tuesday.

"With a 360-degree vision that is great always, he always thinks in ways that help us control the offence.

Simeone disagreed with the notion Bayer do not play the ball on the ground, claiming they are like many of their Bundesliga counterparts in packing plenty of attacking threat.

"Bayer are a very tall team, but they don't play the ball long, they play a direct game, and those are their strongest virtues, their three offensive players are really fast," the Argentinean said.

"Because they are fast they always get second chances when they attack, and we will have to face and solve these situations efficiently, which proved hard for us in the first half in Germany."

While Bayer midfielder Simon Rolfes tried to claim the underdog tag, opposite number Mario Suarez said the German outfit is closer to the quarter-finals than Atletico.

"They [Bayer] are the ones with the advantage, they got a good result at home, what we have to do tomorrow is come out strong and score quickly, and from then on, our goal is evidently to go through, but we know we have to be at our best," Suarez said.

"It's going to be a good game, and we hope to come out as the winners."