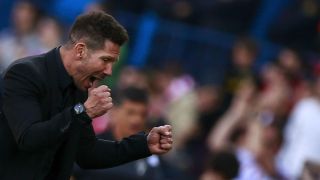 Atletico Madrid boss Diego Simeone is refusing to give up on securing a place in final of the Champions League, despite heading into the second-leg of their semi-final with Real Madrid with a 3-0 deficit.

Cristiano Ronaldo's superb hat-trick ensured Madrid took a huge step towards retaining their Champions League crown, although Atleti will have the Vicente Calderon behind them in Wednesday's second-leg.

And, after Saul Niguez's second-half strike handed Atletico all three points against Eibar in Saturday's LaLiga clash, Simeone claimed that nothing is impossible for his side.

"On Wednesday we have a very difficult game, impossible for many, but not for us, nothing is impossible" Simeone said.

"They are two different games, we were beaten the other day and the following days have been difficult.

"Now we need to be ready to play in a huge game."

Saul's effort all but secured a sixth-successive top-three finish in LaLiga for Atleti, who now hold a five point advantage over fourth-placed Sevilla with two games remaining, and Simeone has emphasised the importance of consolidating that position next time out.

"The third place is still not closed off, we are missing a point," Simeone continued.

"I am proud to have these players, it makes me happy to see the atmosphere around the club.

"We started the season poorly and lost regularly, so to get up and continue fighting has put us in an important place and we are looking forward to closing it out in the next game."