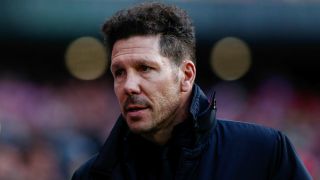 Atletico Madrid coach Diego Simeone felt Sevilla were worthy winners after his side slumped to a home defeat in the Copa del Rey.

Despite going ahead through Diego Costa in the 73rd minute in the first leg of the quarter-final tie, Atletico were beaten at the Wanda Metropolitano on Wednesday.

Jesus Navas and Joaquin Correa struck in the final 10 minutes to see Sevilla to a 2-1 victory, a result Simeone said was fair.

"It was a difficult game. Sevilla, in the first half, had situations. It was open," he said, via Marca.

"In the second, we got ahead and that was when they were the most decisive.

"The victory is deserved, but there is a match in Seville in a week."

The result ended a four-game winning streak for Atletico, who have work to do heading into the second leg.

"We can always and we want to improve. We will look for solutions to some difficulties we had," he said.

"We wanted to compete. There were situations for both. The goals almost always come from mistakes and the one who commits the least gets more."