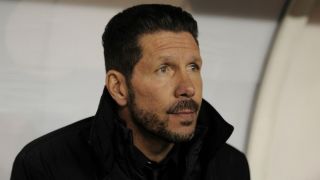 Atletico Madrid coach Diego Simeone has urged his players to be on their guard when they host basement boys Levante in La Liga on Saturday.

The 2013-14 champions head into 2016 level on points with current title holders Barcelona at the top of Spain's top flight.

They might have had a slender advantage to their name without a suffering a surprise 1-0 loss at Malaga before Christmas and Simeone is keen to avoid any similar slip-ups.

"Levante are an organised team," he told a pre-match news conference.

"If we don't work as the match requires it will cost us.

"For 2016, I ask for a lot of energy and strength to keep competing as we have been doing."

Atletico completed a move in the opening hours of the January transfer window, securing the services of Argentina midfielder Augusto Fernandez from Celta Vigo.

Simeone is confident that his compatriot will prove to be shrewd addition as the club battle for honours on three fronts.

"Augusto Fernandez gives us alternatives in the midfield and will increase competition internally," he added.