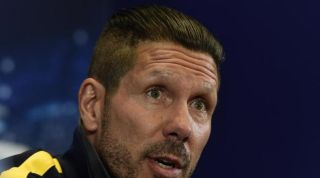 The men from the Spanish capital were held to a goalless draw by Jose Mourinho's charges in the first leg of their UEFA Champions League semi-final in midweek, with the return match set to take place at Stamford Bridge on Wednesday.

However, Simeone insists he is focused solely on this weekend's fixture with Valencia, as Atleti look to remain on course for the La Liga title.

"We always want to win and obviously when you get ready for a match and you don't win, you can not feel the happiness 100 per cent," he said. "It’s not the same when you draw or you win.

"The Chelsea match was five days ago and we will talk about Chelsea again after Valencia.

"Thinking about Valencia I have to say (it) is a different match ... but we have to be strong ourselves.

"We are depending on us and we will go to Valencia to try to keep the same level of performance and same identity and to try to do a good match at a really difficult stadium."

Atleti are currently four points clear of second-placed Barcelona in La Liga, with Real Madrid, who have a game in hand, a further two points back in third.