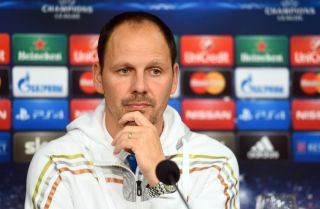 The Slovenian side claimed a surprise 1-1 UEFA Champions League draw at the Veltins Arena, continuing their impressive Group G start.

Damjan Bohar silenced the Gelsenkirchen crowd with a 37th-minute opener but Klaas-Jan Huntelaar responded just before the hour-mark.

Schalke had several late chances but Maribor goalkeeper Jasmin Handanovic kept them at bay to give the visitors – in the group stages of Europe's premier club competition for the first time in 15 years - a deserved draw.

"My first impression is that we could have taken more from this game, but we are very pleased with the point," Simundza said.

"The lads put in a very good performance and picking up a point is a very good result for us."

Simundza did bemoan the sloppy nature of Schalke's goal, though, after Mitja Viler needlessly conceded possession to Huntelaar.

"The equaliser was a present from Maribor to Schalke," he added.

"Many things happen in football, but it is true that because of our mistake we conceded this goal."

Maribor's bright start – they drew 1-1 with Sporting Lisbon on matchday one – has increased their hopes of qualifying for the last 16.

But Simundza tempered talk of progression and said: "Even before the group stage started we said that we would take it game by game.

"Sure, we want to win as well, but it is too early to talk about our chances of going through."