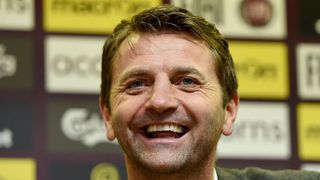 A day after his appointment as Paul Lambert's replacement, Sherwood watched from the stands when Villa progressed to the quarter-finals of the FA Cup with a 2-1 home win over Leicester City.

The former Tottenham boss will take charge for Saturday's Premier League clash with Stoke City at Villa Park, with his side in the bottom three and without a top-flight victory since early December.

However, Manchester City loanee Sinclair feels Sherwood has already made an impact on the squad.

"He came down to the dressing room [on Sunday] and shook everyone's hand," Sinclair said.

"I think there's a buzz around the squad and around the fans. Hopefully we can push forward now.

"Once you get a win and a couple of goals, it's going to give confidence to everyone.

"Hopefully now we go into the next game and show it again and get the points in the Premier League.

"Everyone has something to prove, no-one knows if they are going to play so everyone is going to raise their game come the weekend.

"We can look forward to what he’s got to bring, hopefully he can show it to the team and we can get out of what we need to get out of."