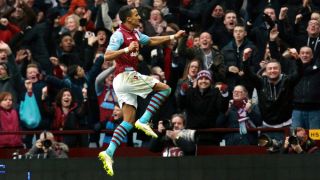 Scott Sinclair will join Aston Villa on a four-year deal in the summer after their Premier League survival triggered a permanent switch in his loan move from Manchester City.

Sinclair has scored three goals in 11 appearances since moving to Villa Park on temporary terms in the January transfer window, helping Villa preserve their top-flight status and reach the FA Cup final.

Two of Sinclair's strikes have come in the club's run to Wembley.

The winger's game-time has dried up in recent weeks with Tim Sherwood preferring Jack Grealish and Charles N'Zogbia in support of Christian Benteke, but the Villa Park boss affirmed his liking for Sinclair in response to the weekend's 6-1 drubbing at Southampton.

"I think if we go back to wide players then Scott will be an automatic choice to play there.

"It's horses for courses at the moment. That's the way we're choosing to play."

And Sinclair is looking forward to nailing down a spot in Sherwood's plans going forward.

He told Villa's official website: "I am so happy.

"We've had a fantastic end to the current season - and now I am already looking forward to the new season starting.

"It's also great for me and the family to be settled now.

"For every footballer, it's important to have that stability. I believe that will help me perform better and push on for this great club in the coming years."