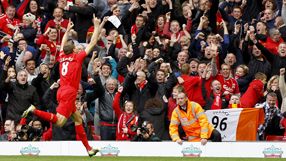 The 32-year-old Liverpool skipper, who has made nearly 600 appearances in all competitions since making his debut in 1998, told the BBC he had had opportunities to leave a number of times in the past few years but had no regrets about staying.

"I've had many opportunities to leave in the last five, seven years and I think everyone is aware that my head has been turned on a couple of occasions but its never been enough to move.

"I have no regrets and I am really happy I have stayed and I am loving my football here. I am born in Liverpoool, I am a Liverpool supporter. I know what it means to play for this club as a supporter and I will never leave," he said.

"The dream for me was always to play just the once for Liverpool, just to say I had played for the team I supported as a young boy.

"So to be approaching nearly 600 caps for Liverpool and nearly 100 caps [for England] at 32... I would have bitten their hand off."

He also said that, despite a sluggish start to the season, a top-four finish in the Premier League and a trophy remained realistic aims.

Liverpool are currently 14th in the Premier League table after six matches and have three points from their first two Europa League matches but asked what their realistic target was, Gerrard told Football Focus: "Top four and a trophy.

"I think teams will find it really difficult to play against us and I'm confident we can go on a run of winning games."

Gerrard has won the Champions League and UEFA Cup with Liverpool plus two FA Cups and three League Cups. He has played 98 times for England but is suspended from next week's World Cup qualifier against San Marino.