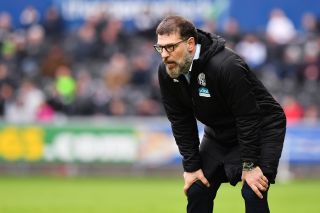 West Brom boss Slaven Bilic revealed his frustration after being held by Birmingham – despite Albion returning to the top of the Sky Bet Championship.

The Baggies were forced to settle for a point from a goalless draw at The Hawthorns as they marked their return to action despite dominating their local rivals.

They moved ahead of Leeds on goal difference but Marcelo Bielsa’s side will reclaim top spot if they avoid defeat at Cardiff on Sunday.

Bilic said: “I’m not happy but even the table looks better now.

“Every game is a potential three points, I’m disappointed with the result and that we didn’t get it but there were a lot of positive things considering it was our first match back.

“We deserved to win and we did enough to win. You have to be good enough in the final product. The number of shots and crosses we had were extremely high.

“It comes down to sharpness, you need matches to get sharp. Everything else was there and there are a lot of positive things.”

Pereira will now make his loan move from Sporting Lisbon permanent after starting his 30th game for Albion, triggering a clause for the Baggies to buy him for £8.25million.

Albion had 21 shots but managed just two on target and Birmingham, who remain 16th, defended well but were rarely overstretched.

They claimed a gritty point in their first game since boss Pep Clotet announced he will leave at the end of the season.

Clotet said: “As it’s the first game we’ve played after three months the last thing I wanted was an open game.

“In an open game would have given them too much advantage. Tactically the team was superb and we had a couple of chances. West Brom had a lot of domination but both teams were as good as each other when it came to the final third.

“With the difference of the teams and in circumstances we played the right game.

“Our mentality doesn’t change, we try to fight for three points every game. I hope this is enough and I’m sure it’s going to be very crucial, the 90 minutes we played, because we have a game under our belt.”