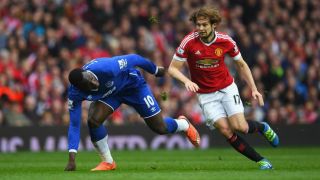 Daley Blind is only just starting to be properly appreciated, according to Manchester United team-mate Chris Smalling.

Blind was one of Louis van Gaal's first signings at United, bringing across the versatile Dutchman from Ajax after he played a key role for Netherlands at the 2014 World Cup.

At United, Blind has showcased his impressive versatility, filling key roles in midfield and defence.

He has slotted in alongside Smalling in the heart of United's defence this season and has helped to build the Premier League's second-best defensive record.

His latest effort, a masterful performance against Everton in which he nullified star Romelu Lukaku, has drawn particular praise but Smalling says he has always been a top performer.

"I think he deserves more plaudits and I think he will get them if he carries on playing the way he is playing," he told the Manchester Evening News.

"Everyone is sitting up and taking note that Daley is one of the mainstays of this team and he is keeping us ticking.

"He is a joy to play alongside. It is a good partnership. We know we can rely on each other.

"When there is a situation you don't have to over cover because you don't trust your partner.

"We trust each other fully and we bring out the best in each other as the games have gone on and the more games we have played together.

"It is great knowing that obviously as he is naturally a midfielder he has that passing range and ability down to a tee and defensively he is very sound as well. He brings a lot to our defensive line in being able to play the ball out and cut through teams."

"Ever since Daley joined the club he has rarely been injured. He has been able to bang out the games and have a very high consistency," said Smalling.

"By each performance he is putting any critics out there to bed. He has been one of the top centre-backs this year."