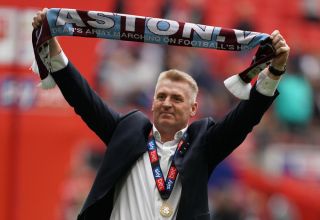 Dean Smith has called on new signing Mbwana Samatta to immediately bring his quality to bear as Aston Villa bid for a third visit to Wembley in 21 months.

After playing the last four matches without a recognised striker, Villa boss Smith will hand Samatta his debut for the second leg of his side’s Carabao Cup semi-final at home to Leicester following the Tanzania international’s recent £8.5million move from Genk.

After losing £22million summer capture Wesley to a long-term injury at the start of the month, Smith is relieved to finally have a new forward on board, although is wary of putting too much pressure on the 27-year-old from the off.

“We’ve all seen before how expectations can be built up, but not from within the building,” said Smith.

“There’s always an adaptation risk when a player comes in from another country, and we’ve had a few this season.

“We’re not expecting him to hit the ground running straight away, but we know the qualities he has and hopefully he can bring them to the forefront straight away.”

Appreciating Samatta’s striking characteristics are in contrast to those of Wesley, Smith added: “He’s a different kind of player.

“Wesley’s big, strong, can make the ball stick, he can link it up. Ally’s more of a player that will work off the shoulders, a penalty-box goalscorer. They’re different types of strikers.”

Despite signing Samatta, Smith is hopeful of bringing in another forward before the transfer window closes on Friday night.

With the tie delicately poised at 1-1 from the first leg at the King Power Stadium three weeks ago, Smith has his sights set on leading his team out at Wembley on March 1.

That would represent Villa’s third trip to the national stadium since May 2018 after losing a Championship play-off final to Fulham on that occasion, but making up for it by beating Derby last May to clinch their place in the Premier League.

“To get to a major domestic cup final in my first full season would be magnificent. We know just how we were feeling last season with the play-off final, what a great place Wembley is to go and the feel-good factor it brings.”

With Manchester City 3-1 up on Manchester United in the other semi-final following the first leg between the sides, Smith is hoping for an opportunity to address the 6-1 league humiliation at home to Pep Guardiola’s side a fortnight ago.

“City aren’t in there yet, United will have something to say about that,” said Smith.

“But I’d love to get to Wembley and play them (City) for an opportunity to put things right knowing what went wrong at Villa Park.”

Smith also has another striker in Keinan Davis available again after three months out with a hamstring injury, but midfielder Danny Drinkwater is ineligible after playing in an earlier round in the competition while on loan with Burnley.