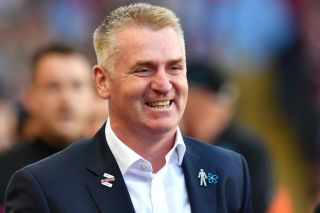 Aston Villa boss Dean Smith is backing his team to maintain their current progress and win a place in the Championship play-offs after their 2-1 home win over Bristol City.

Tammy Abraham broke the stalemate with a 55th-minute penalty – his 24th goal of the season – and Conor Hourihane added a second in the 66th minute before Famara Diedhiou pulled one back for the visitors eight minutes later.

However, there was no equaliser and Villa could not be denied their eighth successive win, equalling a record last achieved in April 1975 – and they achieved promotion on that occasion.

Smith, who congratulated each Villa player as they left the pitch, said: “The chances we created were excellent and the only thing missing were more goals.

“Bristol City contributed to the game and they were always a danger on the counter-attack but it was another worthy win.

“The clear-cut chances we created were outstanding but I think their goalkeeper, Max O’Leary, had the game of his life.

“The penalty was the turning point and it was good to see Tammy Abraham tapping it away after missing one at Rotherham in midweek.

“To put in the performance we did against Bristol City in  the absence of Jack Grealish and Tyrone Mings made me proud of the players.

“People say we are a one man team with Jack Grealish but we displayed against Bristol City that this is not the case. Obviously I would rather have him in the side.

“We have a good talented squad.  When they work hard  for each other and see the work rate and desire they show they can certainly go far as a group.

“To win eight successive games is an achievement in this league.  It has been a tough run and it is a credit to the players.

“We still haven’t cemented our place in the play-offs but we will keep playing well and putting on good performances.”

City boss Lee Johnson said: “We expect to compete strongly but the key decisions went against us.

“Villa are a top side with some top quality players but the truth is that we scored a perfectly good goal which was disallowed.

“It was a good Championship game but it was important that the officials were on top of their game which was not the case.

“We gave the game a good go but I thought we should have been more aggressive.

“My only criticism of the lads is in the first 20 minutes of the second half we didn’t excel in the basics.

“But Villa have a fantastic squad with some prize assets.  it shows what a good win it was for Villa because of the form we are in.

Johnson added:  “I am proud of what the players have done.  It is in our own hands to achieve what we want to achieve.

“I do not have one bad thing to say about my squad.  In terms of character, attitude and commitment, my lads have that in abundance.”