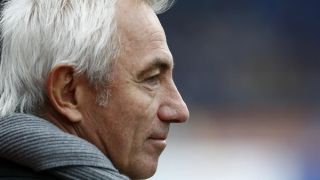 Australia have turned to former Netherlands and Saudi Arabia head coach Bert van Marwijk for this year's World Cup in Russia, it was announced on Thursday.

The Socceroos were searching for a new coach after Ange Postecoglou surprisingly walked away, despite guiding Australia to a fourth successive World Cup via the inter-continental play-offs in November.

Dutchman Marwijk – who led the Netherlands to the 2010 World Cup final – will take charge for the showpiece tournament, starting in June, having secured Saudi Arabia's qualification for the first time since 2006 before the 65-year-old was unable to agree a new contact with the Asian giants.

It remains to be seen who will coach the Socceroos after the World Cup, though Sydney FC boss Graham Arnold is the favourite to oversee the national team long term.

BREAKING | The Caltex are delighted to announce the appointment of Bert Van Marwijk as our new Head Coach. . January 25, 2018

"I know a lot about the players and how the team has been playing after coaching against them for the two World Cup qualifiers, in 2016 and in June last year," said Van Marwijk, who agreed terms with Football Federation Australia in Amsterdam.

"I have also been impressed by the national team set-up that the FFA has developed over the past few years.

"I want to thank Steven Lowy, David Gallop and [FFA's Head of National Performance] Luke Casserly for the confidence they have shown in me.

"My response to them has been that we are not going to Russia just to be competitive. I want to win our matches."

FFA chief executive David Gallop added: "Bert was our preferred candidate to take the Caltex Socceroos to the World Cup so we are delighted to have secured his services.

"We went through a thorough and disciplined process and used internal and external experts to build up a profile of the person who would be the best fit for the task in Russia. We had a number of outstanding coaches very interested in the role but Bert was at the top of our shortlist."

Australia will face Norway and Colombia in a pair of international friendlies before going head-to-head with France, Denmark and Peru in Group C at the World Cup.