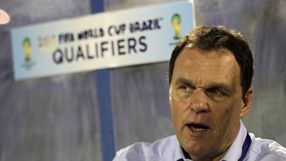 The 19 players named in the squad on Tuesday for the October 11 qualifier at Sydney's Olympic stadium were all part of the 23-man group that eased Australia to victories over Thailand and Saudi Arabia earlier this month.

The Socceroos lead Group D on six points, three points above second-placed Thailand as they bid to qualify for their third successive World Cup at the Brazil finals in 2014.

Oman, who have never beaten the Socceroos in three previous attempts, are bottom of Group D behind Saudi Arabia.

German Osieck retained playmaker Tim Cahill in the squad for the October 11 match against Oman at Sydney's Olympic Stadium, despite the Everton midfielder suffering a leg injury in his English Premier League match against Manchester City on Saturday.

But there was no room for veteran midfielders Harry Kewell and Brett Emerton, who have recently returned to Australia to play in the domestic A-League after long careers based in Europe.

Osieck said the pair had not been considered due to a lack of match fitness, brushing off media speculation that local soccer administrators had leaned on the coach to allow them to play in the struggling competition's season-opener in October.

Kewell and Emerton will face off for Melbourne Victory and Sydney FC respectively in a blockbuster opener that falls three days before the Oman match and a day after the Socceroos play a friendly against Malaysia in Canberra.

"I decided to give [Emerton], again like Harry, the opportunity to get settled in his new environment, and I don't want to over-stress him and I think it's the best solution from my point of view and I'm very comfortable with that," Osieck told local reporters on Tuesday.

Osieck will pick his side for the Malaysia friendly from the same 19-man squad.