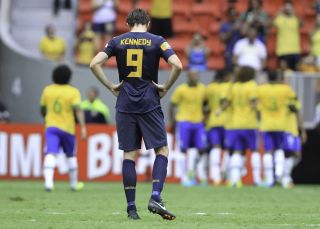 Davidson, 22, has just one Socceroos cap to his name thus far, but consistent form for Eredivisie club Heracles has thrown his name into contention for Holger Osieck's side, who are preparing for next year's World Cup having qualified in June.

With Osieck's job on the line approaching the two internationals and the finals in Brazil, Davidson said the Australian squad had to save face after their 6-0 shellacking at the hands of the World Cup hosts last time out in September.

"I think definitely the boys are fired up to show the Aussie public that against France it's going to be a different game," Davidson said.

"As a footballer, you never want to lose like the scoreline in Brazil, but sometimes it happens so you just have to move forward and forget about it."

Davidson has started in seven of nine games in the Dutch top flight, and he said his form has left him in good stead to get some minutes in the coming week.

"It's been a good start so far, I've started most of the games so ... we've had a new coach (Jan de Jonge), new system," Davidson said.

"He's put me in, and it's been going well. I can't complain, just happy I'm playing week in, week out, just trying to stay consistent and playing as much as I can this year.

Davidson added on the impact the friendlies will have on his chances of getting selected to go to Brazil: "I think it's very important, I think most importantly first is to train well this week, and if we do get an opportunity to play, do as much as you can in the game and show them what you can do."

Bayer Leverkusen forward Robbie Kruse said the Australians' horror show in Brasilia will hopefully help them in the future.

"There's no positives you can take from that match, so obviously you realise we're not as good as we think," the former Melbourne Victory man said.

"Hopefully we can move forward to the next game, try and not make the same mistakes, and not try and show too much respect to the opposition, or not give them too much time and space and turn over a cheap ball.

"It's going to be another tough test, but hopefully we can bounce back."

Middlesbrough defender Rhys Williams said the squad lost track of their 'never give in' mentality against Brazil, and the upcoming friendlies would be the ideal chance to reinstate their trademark.

"The motto for Australia is that we never give up, and there were discussions after the game that we sort of let them take over a bit which isn't like us," Williams said.

"The boss has picked a good opposition now against France, it's a great opportunity to put things right."

Australia take on Les Bleus in Paris on Friday, before battling the Canadians at Craven Cottage in London on Tuesday.