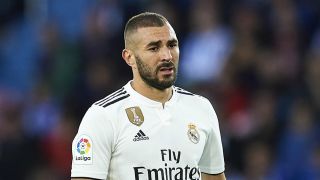 Benzema has gone eight league games without a goal after again failing to net in Madrid's 2-0 win over Real Valladolid at the Santiago Bernabeu on Saturday.

The Frenchman has seven goals in 16 matches in all competitions, but just four of those have come in LaLiga.

But Solari praised Benzema's contribution after Madrid ended a five-game winless run in the league.

"I'm not the one who is going to discover him. He was liked by the previous managers and he's an incredible player," he said.

"He's got incredible tactics, he makes his team-mates better and he worked very hard also in defence which I think are fantastic characteristics which say a lot about him."

Madrid are sixth in the LaLiga table, seven points behind rivals and leaders Barcelona.