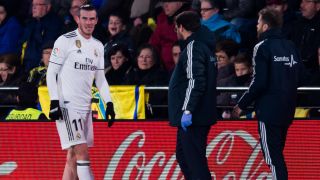 Santiago Solari said the loss of Gareth Bale to injury midway through Real Madrid's LaLiga clash with Villarreal cost his side victory as they were held to a 2-2 draw.

Madrid took a slender lead into the interval in Thursday's meeting at the Estadio de la Ceramica, where Karim Benzema and Raphael Varane cancelled out Santi Cazorla's opener.

Bale struggled to get involved in the first half and did not emerge following the restart due to a suspected calf problem – the latest in a long line of injuries for the Wales forward – after going to the ground under minimal contact from Javi Fuego in the 38th minute.

With Isco in their ranks for the second half, Madrid failed to see the match through and were pegged back by a late Cazorla header to bring an end to their three-match winning streak in LaLiga.

15 - Gareth Bale has been subbed off more times than any La Liga player this season in all competitions (15). Injured. pic.twitter.com/znqXlL79KH— OptaJose (@OptaJose) January 3, 2019

Head coach Solari felt that Bale's absence played a big part in Madrid's inability to add to their lead prior to being stung by Cazorla's late second, with the Champions League holders unable to hit their opponents on the break with any regularity.

"We had the victory in our hand and wanted to kill the game. But they came back and got the equaliser," he told Movistar. "They pressed a lot, were playing at home and needed the points.

"Gareth leaving like that cost us as he had a problem and we missed that counter-attacking edge, and Gareth is a specialist at just that. You would have seen what happened - he got a bang and felt something and was not able to continue.”

Luka Modric was another Madrid player to leave the field early, lasting just over an hour before being replaced by young midfielder Federico Valverde.

Solari explained after the match that Modric was not fully fit and it was always his plan to withdraw the Ballon d'Or winner.

"Luka was recovering from the flu and gave us everything he had," Solari added. "I was happy to get that 60, 65 minutes from him, it was pre-planned. And Valverde gave us energy and also control when he came on. We are happy with what the younger players are giving us."

Madrid's failure to see out the final stages of the match means that they are stuck on just three wins from nine away LaLiga matches this term as they sit fourth in the standings, seven points adrift of leaders Barcelona.

"I don't think it was about lacking control, but more a lack of countering and doing them damage in the second half," Solari said. "We had two clear chances for a third goal with Lucas [Vazquez] and Marcelo. But it's true we were lacking clarity in our breaks, and Gareth specialist at that."