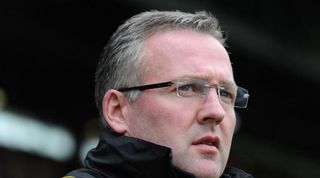 Villa played out a scrappy 0-0 draw with Newcastle United on Saturday, though the result leaves them with four points from two games after their season-opening 1-0 win at Stoke City.

Lambert's men failed to muster a shot on target and rarely looked threatening in the absence of their top scorer for the previous two seasons, Christian Benteke.

The Belgium striker has missed the start of the campaign with an Achilles injury that ruled him out of the World Cup and Lambert believes the 23-year-old's impending return to action, coupled with their strong defence, should see Villa succeed this term.

"I couldn't ask the lads for any more," Lambert told BT Sport. "But bearing in mind we've got Benteke to come back, [Libor] Kozak to come back, I'm pretty sure if one of them was there we'd have got at least a couple of goals.

"Christian should start training after the international break and we'll see how he is."

Lambert was also delighted by the performance of Aly Cissokho and Philippe Senderos on their home Villa debuts.

Cissokho failed to impress in the Premier League last season when on loan at Liverpool, but he looked a threat against Newcastle on the left flank, while Premier League veteran Senderos also shone.

Lambert added: "I think Cissokho was outstanding and he was that good, they had to put [Moussa] Sissoko back to stop him.

"Philippe has been great, he's a great talker in the game. A lot of people criticised him coming here but so far he's been terrific."