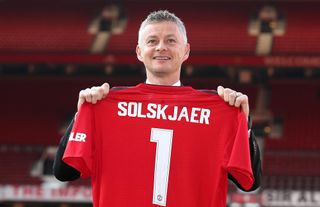 Ole Gunnar Solskjaer has warned his players there is no room for complacency after setting his sights on Premier League glory hours after being confirmed as Manchester United’s permanent manager.

A move that has seemed inevitable for weeks was made official on Thursday morning as the 46-year-old fans’ favourite saw his caretaker role turn into a full-time post.

Solskjaer has been rewarded with a three-year deal after bringing smiles and a swagger back to a United side that had been toiling under divisive former manager Jose Mourinho.

A remarkable run of 14 wins from 19 games has resulted in the feel-good factor returning to Old Trafford and the club back in top-four contention after being 11 points off the pace when the Portuguese was sacked 100 days ago.

“I’m just going to be myself as I’ve always been,” 1999 treble hero Solskjaer said at his unveiling.

“Of course, I want to be successful, of course I want to lift trophies, but I can’t wait to get onto the job, onto the challenge of improving this great bunch of players because it’s a squad full of potential.

“I worked with them – or we have as a staff – for three months and the improvement is there to be seen.

“We see them every single day in training, the attitude has been fantastic but we know we’ve got a way to go.

“But lifting a trophy, I am sure, will be a success.”

The jaw-dropping Champions League win at Paris St Germain even keeps hopes of a trophy alive this season.

“We’ve got a chance – of course we have,” Solskjaer said with a smile as the quarter-final against Barcelona looms large.

“It’s going to be a tough one, a mountain to climb but we’ve climbed a few mountains before.”

Solskjaer was typically cheery throughout a packed press conference at Old Trafford but struck a more authoritative tone when addressing the media.

The Norwegian, knows United as well as anyone after representing the club 366 times and coaching the reserve team, struck the right tone between short-term success and long-term requirements.

“To lift the Premier League trophy again is what we expect, what we’re used to, what we have done so many times,” said Solskjaer, whose former club Molde are understood to have received compensation as a goodwill gesture.

“We can’t wait for too many years, but we have to take it step by step. It’s not like it’s going to happen overnight, catching 15, 16, 17 points or whatever we are behind the top teams now.”

Solskjaer has discussed summer transfers plans with executive vice-chairman Ed Woodward and hopes to have signings in place before pre-season gets underway with a July trip to Australia.

Furthermore, he has opened the exit door to anyone that is not ready to fight each and every game for United.

“Players who get complacent never last at this club anyway,” he said. “Managers… I’m the same.

“I think the players know my expectations on the future.”

For now, though, Solskjaer can enjoy the fruits of the last three months’ labour.

Sir Alex Ferguson was one of the first people he spoke to after being approached about the full-time role, while he intends to keep the same backroom team together as assistant Mike Phelan speaks to the club.

Optimism and positivity were palpable throughout his unveiling, with the excitement clear ahead of his first permanent match in charge against Watford on Saturday.

Asked if he could believe he would be in this position three months ago, Solskjaer said: “Of course, because it is happening.

“I’ve dreamt about it and maybe visualised it myself, as I did as a player.

“The players have responded fantastically to us coming in and we’re just looking forward to working together, to improve the players and the club.”