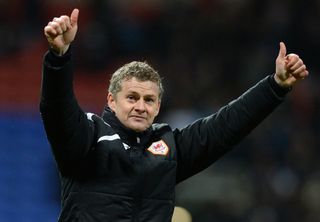 The Norwegian can expect a rapturous reception from United fans, who hold him in high esteem due to his exploits during his playing days with the reigning Premier League champions.

Solskjaer enjoyed an illustrious 11-year spell at Old Trafford and his finest hour came when he scored a dramatic late winner in the 1999 UEFA Champions League final against Bayern Munich.

The 40-year-old is not sure how he will react when he returns with his Cardiff side, but the former striker will not lose sight of the job in hand as he attempts to keep his new club in the top flight.

When it was put to the Cardiff boss that the prospect of going to Old Trafford may not be as ominous as it once was, he said: "I don't agree.

"To go to Old Trafford is a dream for many footballers and sometimes that can be daunting as well for teams and players. Obviously it's going to be my job to make sure that it isn't too daunting for my players and also myself.

"I’ve had had a great relationship with them (United fans). When we've watched the United games over the years back in Norway, I’ve nudged the kids and said 'they are still singing about your dad.'

"I'm not that emotional as I said. It’s hard to say, though. You never know, sometimes it just catches you doesn't it? Like when you do your wedding speech. I will focus on the job on Tuesday night though."