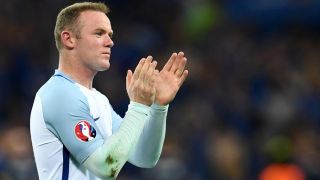 Allardyce signed a two-year deal to replace Roy Hodgson, who announced his resignation after England's tournament closed with a dreadful last-16 loss to Iceland

Here, we look at the five major issues in his in-tray.

How much a forgettable campaign in France took out of England's players might only become apparent when they convene for their opening 2018 World Cup qualifier against Slovakia on September 4. But a glaring lack of composure under pressure was in evidence during the shambolic second-half display versus Iceland.

Opponents will be keen to test whether the Three Lions are liable to buckle under the strain once more and the puzzle over why high-class Premier League performers fall short on the international stage is a conundrum frustratingly unsolved by a generation of England bosses.

HOW TO USE ROONEY

England's captain and record goalscorer should be a pillar of calm among the upheaval, but Wayne Rooney appears to be suffering an identity crisis. At the end of last season, the career-long forward was revelling in a midfield role under Louis van Gaal at Manchester United.

"Sometimes you have to make choices in your career and at the moment it's better for me to play deeper," he said after scoring in United's closing Premier League win over AFC Bournemouth.

Hodgson was persuaded to pick Rooney in midfield for England's first Euro 2016 match against Russia and he impressed despite never having featured in the position over 111 previous international caps. The 30-year-old also shone in the last-gasp win over Wales but he was one of the main culprits in the collapse versus Iceland, despite netting an early penalty. Now Jose Mourinho says Rooney will "never be 50 metres from the goal" in his United team, further clouding the issue.

Whatever the course of action with England – midfielder, forward or dropped – Allardyce's decision on Rooney must be strong and swift.

Among England's woes across the channel, Raheem Sterling – their shining light at the 2014 World Cup – suffered a particularly galling campaign. Industrious work but a lack of end product was the story of the Manchester City winger's opening-match efforts versus Russia before a wretched miss early in the Wales game preceded an almost entire collapse of his confidence.

He returned to win a penalty before fading from view against Iceland and was subjected to some needlessly hostile vilification from the English tabloid press. The 21-year-old remains a rare talent and new Manchester City boss Pep Guardiola has spoken of his eagerness to work with Sterling and help him through this damaging slump. But he faces competition for places at City, with Spain international Nolito through the Etihad Stadium doors and Germany's Leroy Sane reportedly on his way.

When Sterling pulls on an England jersey again, it should be when he is primed to bolster the England cause and not damage a fledgling career that has already absorbed too many slings and arrows.

The message from England, after a group stage at Euro 2016 when they dominated possession but lacked inspiration against well-manned defences, was that they would fare better against opponents who came to attack. Iceland attacked in the last 16 and scored twice in the space of 18 minutes.

Joe Hart's error on Kolbeinn Sigthorsson's winner is a cause for concern, but England at least have high-class back-up in the form of Fraser Forster and Jack Butland. At centre-back – traditionally an area of strength for the Three Lions – the cupboard is alarmingly bare. First-choice duo Gary Cahill and Chris Smalling were only accompanied by John Stones in France, largely due to a lack of other viable options. It must be hoped Stones' proposed move to Manchester City pays dividends but England must craft a solid backline from meagre resources.

They can perhaps look towards their Euro 2016 conquerors for inspiration.

Hodgson led England to 10 wins from 10 in qualifying for Euro 2016 and seemed to discard the merits of this not inconsiderable achievement almost entirely, as muddled selection and tactics brought about his downfall at the tournament proper. For a country without a major honour to its name in 50 years or a semi-final appearance for 20, there remains a high opinion of England's capabilities that seems increasingly detached from reality.

Should England progress serenely to Russia 2018, this should be recognised as a solid foundation on which to build – organisation was king for Portugal and many others at Euro 2016 – and not some inevitable rite of passage.