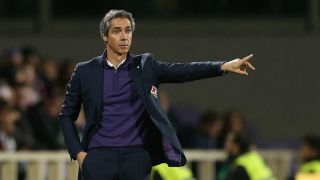 Fiorentina coach Paulo Sousa has ordered his players not to take Milan lightly in Sunday's Serie A encounter at San Siro.

The Viola recorded a comfortable 2-0 win over the Sinisa Mihajlovic's men when they locked horns on the first weekend of the season, but Sousa expects this weekend's match to be nothing like that game.

"It will be an entirely different game than in the first half of the season," Sousa said at a news conference.

"We have to be very focused. My colleague has taken some important decisions at the start of the season.

"We started the season against a team that has a very different structure than the team we meet on Sunday. They made big changes immediately after the game against us.

"They have become more stable and consistent and have recorded some good results."

Sousa received his fair share of criticism following Fiorentina's 3-1 loss at the hands of Lazio last week, but he remains unperturbed by any negative opinions.

"You have to accept criticism when you are in this job. Criticism helps you improve," he added.

"It's clear that the coach is the first one to be blamed when there is a negative result. Expectations have grown compared to the start of the season. There is no room for error.