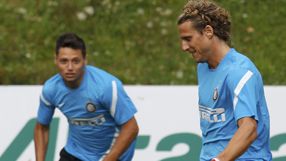 When the teams run out at the San Siro on Saturday for a crucial early-season contest in the race for the scudetto, well over half the players could hail from that continent.

The team from Naples, the city from which many Italians emigrated to South America at the beginning of the 20th century, is catching up fast.

Inter's Argentine captain Javier Zanetti, who this week celebrated a club record 757 appearances, said he would like to remain in Milan even longer.

"I would love to stay at Inter and have other responsibilities but it's not something I've thought too much about," the 38-year-old Argentine told club website. "I want to dedicate all my energy to the final years of my playing career."

Fifth from bottom after failing to win any of their opening five matches under Gian Piero Gasperini, Inter, scudetto winners from 2006-2010, go into Saturday's match in buoyant mood with two wins out of two for new coach Claudio Ranieri.

"It wasn't easy but he's been able to take the squad in hand as much on the psychological side as in tactics."

Moratti, whose side are again likely to be wihout Dutch playmaker Wesley Sneijder due to a muscle strain, confessed to a soft spot for the big club in Italy's impoverished south.

"We all cheered Napoli on the other night [against Villarreal]," he said. "They are a nice team with players desperate to succeed, but it's too early to say which one of us is the more likely to challenge for the scudetto."

Napoli, whose title aspirations last season were dented by away defeats to their closest challengers, are banking on a return to form for Macedonian striker Goran Pandev, on loan from Inter.

"Unfortunately, Edy [Cavani] is out but we have to give other players their chance to grow," De Laurentiis, whose side lie fourth after four games, told local station Radio Marte. "I would be pleased if Pandev is fired up to score a goal against his former team-mates."