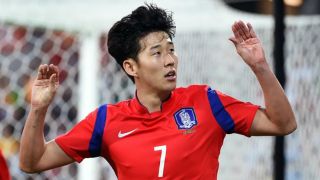 Son Heung-min celebrated his recent move to the Premier League with a hat-trick as South Korea thrashed Laos 8-0 in an AFC World Cup qualifier on Thursday.

Son joined Tottenham from Bayer Leverkusen last week and will be aware he faces much stiffer challenges in England's top flight than the one offered in Hwaseong by a side ranked 174th in the FIFA world rankings.

The tone of an embarrassingly one-sided contest was set almost immediately as South Korea capitalised on some abject defending to score twice in the opening 12 minutes through Lee Chung-yong and Son.

Kwon Chang-hoon and Suk Hyun-jun struck either side of half-time to extend the hosts' advantage, Hong Chul setting up the latter for his third assist.

And Son helped himself to two more goals in the closing stages, either side of a second for Kwon, before Lee Jae-sung rounded off the scoring in stoppage time.

South Korea top Group G - in a campaign that also serves as a qualification process for the Asian Cup - with six points from two matches, while Laos remain bottom of the pile.

The recalled Suk wasted little time in making an impact, quite literally, clattering into Phoutpasong Sengdalavong as the Laos goalkeeper claimed a third-minute cross.

Sengdalavong was soon picking the ball out of the net for the first time as Hong's clipped cross from the left of the penalty area picked out Lee Chung-yong, who did well to impart pace on the ball with a firm header back across goal.

Hong also provided the assist for South Korea's second as he pulled the ball back for recent Tottenham signing Son to convert.

Jung Woo-young hit Sengdalavong's right-hand post on two occasions prior to Kwon making it 3-0 on the half-hour, the goalkeeper seemingly left bewildered by a powerful shot from distance.

As his opposite number toiled, debutant Kwoun Sun-tae was little more than a spectator between the posts for South Korea.

When a fourth goal did arrive in the 58th minute, Hong was again the creator, his low cross enabling Suk to mark his second cap - five years after his first - with a goal.

Son then rifled home a strike from an acute angle to make it 5-0 in the 74th minute, and Kwon also grabbed his second with a close-range volley as Laos' limitations were cruelly exposed once more.

There was still time for Son to complete his hat-trick, before substitute Lee Jae-sung stroked home an eighth in the final minute of time added on.