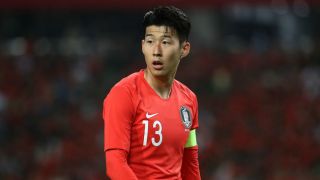 South Korea hope to have kept their tactics against Sweden a surprise by swapping shirt numbers in recent training sessions and matches, coach Shin Tae-yong has said.

Shin's men kick off their World Cup campaign in Nizhny Novgorod on Monday in what has been described as a must-win match, with Mexico and Germany the other opponents in Group F.

Players have been seen wearing different numbers during preparations for the finals in Russia and Shin says it was a deliberate ploy to confuse any Sweden scouts ahead of the match.

"In my opinion, I think when the Europeans look at us Asians, I think it could be one of the reasons," he told a news conference. "I think we wanted to confuse the Swedish team. That's why we did that."

Asked to elaborate, he said: "We swapped them around because we didn't want to show our opponents anything. Ki Sung-yueng is probably known, as is Son Heung-min, but for the other players it might be a little bit confusing.

"It's very difficult for Westerners to distinguish between Asians and that's why we did that."​

The build-up to the match has already seen allegations of spying levelled against each side, with Sweden having been accused of sending a scout to a closed training session after complaining that their own base camp was too easy to infiltrate.

Shin, however, thinks any detailed level of analysis is to be expected ahead of a big game.

"I think all coaches probably feel that way, that the other team is spying on them," he said. "We have to analyse the other team and we do what we can to win the match, so I think it's perfectly natural for us to try to understand the other team."

Sweden are without Zlatan Ibrahimovic at a major tournament for the first time since Euro 2000, their record goalscorer now retired from international football, but Shin does not feel they will be any weaker in attack.

"If he had been part of the team, they probably would have been able to score a lot of goals, but they managed to get through the qualifiers without him," Shin added.

"Without Ibrahimovic, they were able to work stronger as a team."