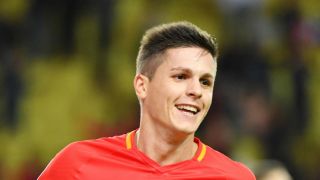 Guido Carrillo has completed his move from Monaco to Southampton, boosting the forward options of the Premier League strugglers.

Southampton are 18th in the Premier League and have found goals hard to come by this season, scoring just 24 times in 24 matches.

Carrillo moves from the Ligue 1 champions after signing a contract until June 2021, linking back up with Mauricio Pellegrino, who he worked with at Estudiantes in Argentina.

"I'm very happy. It's a great feeling to be a part of this club," said Carrillo, who scored four league goals for Monaco this season.

"Lots of things attracted me. I know Southampton from watching the Premier League from when I was small, I've always regarded it as the most important league in the world.

"I obviously know the coaching staff, I've worked with them in Argentina and I also spoke with some players who were former team-mates in Argentina, who are now playing in the Premier League and they told me all about the club and gave it a shining reference.

"Therefore, I had no doubts when I took the decision."

Southampton are reported to have paid a club-record fee of £19.1million to secure Carrillo, eclipsing the £16m paid to sign Mario Lemina, and vice-chairman Les Reed acknowledged the deal was difficult to complete.

"A huge amount of work has gone in to completing this transfer, and we are thrilled that we have now been able to push it through to completion," Reed said.

"Guido represents a very exciting addition to our attacking options ahead of the final months of the season, possessing plenty of experience at the highest level, while also having the potential and the desire to improve even further.

"We are confident he will benefit us not only in the remainder of this campaign, but in the years to come."