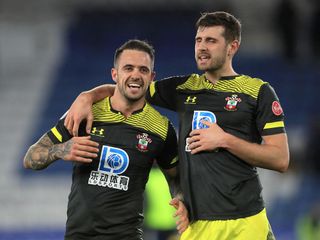 Leicester suffered another home stumble in their bid for Champions League football next season as Southampton erased memories of their 9-0 mauling by the Foxes in October with a 2-1 victory.

Although Dennis Praet scored his first goal for Leicester since his £18million move from Sampdoria in August, a viciously-deflected Stuart Armstrong strike and Danny Ings’ 16th goal of the season gave the Saints their fourth Premier League win in five games.

For City, it is now back-to-back league defeats at the King Power Stadium and only one point from a possible nine at home as Brendan Rodgers’ side have faltered of late in front of their own fans.

VAR, though, also played a major role in the game, ruling out three offside goals for Leicester, and a penalty decision for the visitors.

It was an enthralling encounter from start to finish, with Ings twice denied by Kasper Schmeichel in the sixth minute.

Eight minutes later Leicester capitalised. Quick thinking from Ayoze Perez, after he had been fouled by Ryan Bertrand, saw him swiftly spray a free-kick into space down the left for Jamie Vardy to run into.

A brilliant low cross from Vardy, celebrating his 33rd birthday today, saw him deliver the ball exactly into the area where Praet demanded, allowing the Belgian to side-foot a first-time shot past Alex McCarthy from six yards.

If flashbacks of the October 25 hammering seeped into the minds of any of the Saints players, they were dispelled five minutes later when Armstrong equalised, somewhat fortuitously as his left-foot curler from just outside the area took a wicked deflection off the back of James Maddison to completely deceive Schmeichel.

Caglar Soyuncu cleared a Jack Stephens side-foot shot off the line in the 47th minute and just after the hour the Saints thought they had won a penalty when Shane Long was clipped in the area by the Turkey international centre-back, who was also given a yellow card by referee Lee Mason.

Long, though, appeared to be offside in receiving a through-ball, with Soyuncu protesting his innocence.

The screens inside the ground suggested VAR was checking the penalty decision, but via the television screens in the press box it could be seen those in Stockley Park were looking at the offside first.

After 90 seconds it was determined Long’s shoulder was marginally ahead of that of Soyuncu, leading to the penalty decision being overturned and Mason nodding to Soyuncu the booking would also be rescinded.

Minutes later VAR also ruled out a clever back-heeled strike from 58th-minute substitute Kelechi Iheanacho, and despite the fans’ protests, the system’s judgements had all proven correct.

Nine minutes from time Ings scored the goal his efforts deserved, slipping the ball between the legs of the onrushing Schmeichel after being played in by Che Adams, who had only come on three minutes earlier.

After Ings and Iheanacho were denied by saves from Schmeichel and McCarthy respectively, more VAR drama followed in the 90th minute, with Jonny Evans’ header meeting an inswinging Maddison free-kick also ruled out, to the frustration of all in the City camp.