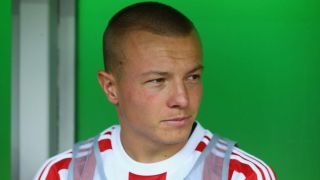 Jordy Clasie has suffered another injury setback ahead of Southampton's Premier League clash with Everton on Saturday and fellow new signing Steven Caulker will also miss out.

Midfielder Clasie sat out the south-coast club's opening game of the season at Newcastle United on Sunday due to a hamstring problem and sustained an ankle injury playing for the under-21 side on Monday, which will keep him out for up to three weeks.

On-loan defender Caulker was an unused substitute at St James' Park and will play no part at St Mary's Stadium this weekend due to a sinus infection.

Southampton boss Ronald Koeman also revealed that left-back Ryan Bertrand (knee) is not yet ready to return, while Fraser Forster and Florin Gardos (both knee) are long-term absentees.

"Jordy Clasie was back, he played last Monday and got an ankle injury and he will be out for the next two to three weeks.

"We have Steven Caulker, he has an infection in the sinus. He was in hospital for two days, he's not in the physical state to be involved at the weekend but we hope that he will be available next Thursday [against Midtjylland in the UEFA Europa League].

"Ryan Bertrand is still not available, maybe in two weeks he will be part of the training sessions."