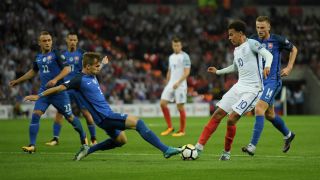 Dele Alli has learnt his lesson after an offensive gesture landed him with a "fair" one-match ban, according to England manager Gareth Southgate.

The Tottenham star found himself in hot water after England's World Cup qualifying win over Slovakia at the start of September when cameras caught him raising his middle finger.

Alli later claimed that he was directing his gesture at team-mate Kyle Walker as opposed to the referee, but FIFA still opted to impose a one-match ban and £3,850 fine for behaviour they felt was "offensive and unsporting".

As a result, the attacking midfielder will miss the visit of Slovenia on Thursday when England can secure World Cup qualification, and Southgate – who does not think Alli has been treated unfairly – insists the 21-year-old will not make a similar mistake every again.

"I think it is probably a fair outcome," Southgate told reporters at his pre-match media conference.

Southgate says he has no injury concerns over his squad. will be absent due to a suspension. October 4, 2017

"I have discussed it with Dele throughout, so he recognises his responsibilities and how things will be viewed, and how his world is changing in terms of the attention on him and the spotlight on him.

"He won't do it again, that's for sure. It's an experience he will have learned from."

Southgate is keen to draw a line under the controversy, but feels such learn curves can prove beneficial for Alli.

"We have had good conversations about loads of different things," Southgate added.

"So now my focus is on him being ready for the game on Sunday [against Lithuania] and making sure he is aware of how we are playing and all the things we are trying to do with the team.

"He is a player we enjoy working with. The things he does on the pitch, in terms of his creativity and the way he plays, are a result of his character and therefore, with that character, sometimes you do these things immediately and think about them after.

"All these experiences will make him better as he goes forward."

England go into Thursday's match knowing that a win will secure their passage to Russia for the finals next year, but Southgate admitted last week that he has had to call up players who do not necessarily deserve inclusion.

Southgate did not backtrack on his comments and reminded his critics that keeping players happy is not in his job description.

"My job is not to keep the players happy, it's to challenge them and create an environment which allows them to be successful. We can't sit back at any point, every session we have to get something from.

"Managers don't necessarily select squads, players do by the way they perform."