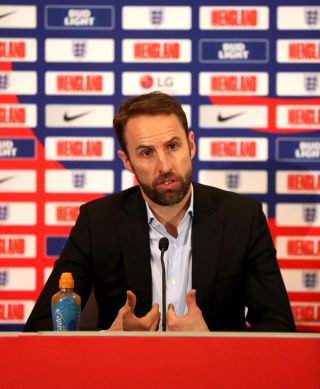 England manager Gareth Southgate has professed his disappointment at the recent crowd trouble at high-profile matches but is hopeful the punishments doled out will deter potential pitch invaders in the future.

Earlier this week a Birmingham supporter was sentenced to 14 weeks in prison after he ran on to the pitch and punched Aston Villa captain Jack Grealish during his side’s 1-0 win at St Andrew’s on Sunday.

It was followed by another incident later that afternoon when a fan shoved Manchester United defender Chris Smalling after he invaded the pitch to celebrate an Arsenal goal.

There have also been recent, high-profile issues in Scotland, with player safety now firmly in the spotlight.

Southgate said he was not surprised by the recent incidents and believes such problems are indicative of societal concerns.

When asked about the problems, he replied: “Well, you’re always disappointed.

“I played in the late ’80s, early ’90s, so it’s not something I’m shocked by because if you go down many high streets at the weekend, unless you’re oblivious to what goes on in our country, there are, unfortunately, scenes of inappropriate and anti-social behaviour.

“So to see that inside a football ground is disappointing for us as a sport, but it’s a societal problem as much as it’s a football problem.

“I think everybody would want to work together to make sure the right security measures are in place but, frankly, we should be living in an era where we don’t need stewards.”

Southgate is keen to keep stadiums a safe place for families and feels the charges brought to the offenders will stop others from invading the pitch.

“Some of the punishments handed out, hopefully, will act as a deterrent,” he said.

“But you have to appeal to people, that they recognise what is acceptable behaviour, in society, really.

“We want it to be a place where everybody feels that they can bring their family and feel safe and enjoy themselves.

“So it would be a huge disappointment if we drifted back to the way the game was in the period when I was growing up.”

Southgate has often spoken of his pride at bringing the country together at such a difficult time as England reached the semi-finals of the World Cup last summer.

He wants that to continue, potentially with success at the inaugural Nations League finals in June, in the hope it can have the same effect as 2018.

“Well, generally speaking, people from any country like to get together and celebrate national events,” he added.

“We can’t keep relying on the royal family to produce babies and have weddings, so there’s got to be other methods of doing that and if we can provide hope and optimism through our performances, then that’s part of our responsibility as a team.

“We always want to play in a way that excites people, we want a team that the public are proud to watch and we hope to play our part. Whether we can resolve all the issues in our country is a more difficult task.”