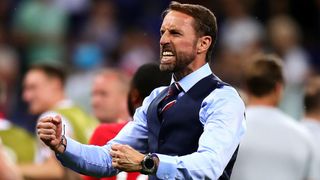 The Three Lions secured a last-gasp 2-1 victory against Tunisia on Monday courtesy of Harry Kane's second goal of the game and are looking to secure their place in the knockout stages, which could be clinched this weekend if results go their way.

However, Southgate is concerned that tournament debutants Panama could be given a tactical advantage after images showing the apparent England side he has chosen for the Group G clash were used by numerous publications.

"Obviously any time if we were to give the opposition the opportunity of having our team it's a disadvantage to us," Southgate told reporters.

"So of course our media has to decide if they want to help the team or not."

Defender Kyle Walker echoed the sentiments of his manager, saying: "If you guys just try and keep it to yourself and don't bring it out, because it's not going to help us.

"All the world has seen that team now but you guys have to do your little bits."