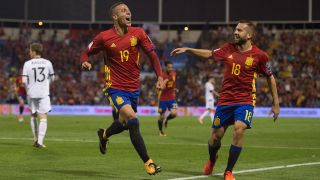 Spain secured their place in the 2018 World Cup after they eased to a 3-0 Group G win over Albania as Gerard Pique received a mixed reception.

Julen Lopetegui's men approached Friday's contest in Alicante knowing they would qualify for the finals in Russia by bettering Italy's result against Macedonia.

But, given the disparity in quality between the two teams, Spain's vastly superior goal difference and head-to-head advantage over Italy, the spotlight was always likely to be on Barcelona defender Pique.

Pique, who has been vocal in his support of a referendum on Catalonia's attempts to secede from Spain, was whistled at an open training session on Monday.

And the centre-back received the same treatment from his first touch at Estadio Jose Rico Perez, but was later brought off predominantly to applause in the second half.

Rodrigo opened the scoring in the 16th minute with a fine close-range effort before Isco's fourth goal in three Spain matches and Thiago Alcantara's header made the game safe in the space of 10 minutes.

Italy's 1-1 draw with Macedonia means Spain go into the final round of fixtures on Monday guaranteed a place in the tournament proper, holding a five-point lead at the top, while Albania's slim hopes of earning a play-off spot are over.

1 - This is the first time Isco has scored and assisted in a single match for Spain . Inspiration October 6, 2017

Rodrigo spurned an early chance to put Spain ahead as he stabbed wide from Jordi Alba's left-wing cross before Azdren Llullaku forced David De Gea into a routine save at the other end.

A glorious opportunity went begging with Rodrigo again at fault as he failed to convert Isco's right-wing cross, heading wide from close range, but the Valencia forward soon atoned for his profligacy.

He controlled Isco's clever pass with his head before smashing a superb stretching half-volley beyond Etrit Berisha to open the scoring.

Sergio Ramos then saw a header turned over before his Real Madrid team-mate Isco doubled the lead.

Koke played Isco in at the near post and he made no mistake in lashing into the top-left corner.

That seemingly put the game beyond doubt but Albania almost responded as Llullaku clattered a header against the crossbar.

But that proved only a brief interlude to Spain's dominant showing and Thiago soon made it 3-0 by nodding in after Alvaro Odriozola surged down the right culminated in a pinpoint cross.

Rodrigo was denied a second by Berisha and Alba fired wide as Spain threatened to turn the contest into a rout, though Pique was fortunate not to see a defensive error on the stroke of half-time not result in a goal for Albania.

Alba stood up a cross for Koke, who saw his header parried by Berisha as Spain kept the pressure on after the restart, with Rodrigo again thwarted by the Albania goalkeeper after some haphazard defending.

Armando Sadiku headed against the left-hand post, but moments of danger were fleeting for Spain and, with their qualification confirmed, they can reflect on an extremely impressive campaign and look ahead to Russia perhaps with questions about Pique's international future put to one side after the early whistles were drowned out.