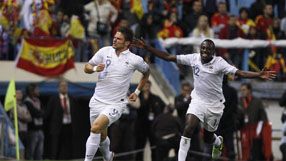 Sergio Ramos gave a dominant Spain a first-half lead at the Calderon in Madrid but after Cesc Fabregas missed a penalty, France grew in confidence until a home-side error led to Olivier Giroud nodding in a stoppage-time equaliser.

The world and European champions stayed top of Group I with seven points from three games, ahead of France on goal difference, with only one team assured of direct qualification from the group for Brazil 2014.

"To win in Paris," was the front-page headline of sports daily As on Wednesday.

"After Ramos's goal [Spain] gradually lost possession, their structure, their touch, their inspiration and finally their luck," the newspaper's match report said.

A headline in daily El Mundo said: "Without the ball problems arrive."

Much of the focus was on coach Vicente del Bosque's decision to play Sergio Busquets at centre-back rather than in his habitual role alongside Xabi Alonso in a holding midfield duo.

Instead of closing down the game, Spain became ragged in the second half as France intercepted passes and broke into large spaces in midfield, a problem which Del Bosque acknowledged.

"We controlled the game well in the first half," he told the post-match news conference.

"Afterwards we opened up, I don't know if it was because we were tired. When it became an end-to-end game it was bad for us. I did miss the balance in midfield a little bit."

Del Bosque's choices off the substitutes' bench were limited after muscle injuries early in each half for David Silva and Alvaro Arbeloa forced his hand.

"We haven't had a single muscle injury in four years and today we had two," he said.

"The disruption did not allow us to manage the changes as we would have liked."

While his first two were like-for-like substitutions with Santi Cazorla replacing Silva and Juanfran, who gave away possession that led to the French equaliser, coming on for Arbeloa, the decision to throw on Fernando Torres at the end was questioned.

The Chelsea striker was brought on for midfielder Andres Iniesta with 15 minutes to go, running out at the stadium where he started his career with Atletico Madrid.

"It was the third change and we weren't sure whether to reinforce the defence or to look for a second, and we went with Fernando," Del Bosque added. "You are always going to have this debate."

With a 24-match winning streak in major championship qualifiers ended, goalscorer Ramos said the result would be a wake-up call to the team.

"This draw brings us back down to earth a little but we are winners and a draw is not a result we accept easily."