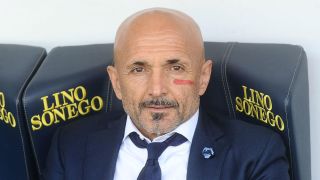 Inter must do their part to keep their Champions League dreams alive by bouncing back from defeat to Juventus with a win against Udinese on Sunday, says coach Luciano Spalletti.

The fifth-place Nerazzurri were 2-1 up against the Serie A leaders last Saturday but an own goal from Milan Skriniar and Gonzalo Higuain's 89th-minute winner consigned them to a 3-2 defeat.

Inter are four points behind joint-third Lazio and Roma in the battle for a spot in next season's Champions League with just three games to go, but Spalletti remains optimistic in their continental push.

"It has not been an easy week and the result of the Juventus game speaks for itself," he told a press conference on Saturday.

| : "If we win all three, we're in the Champions League. This is how we're looking at it. It's clear that there will be hurdles but it all depends on how you approach at these hurdles." May 5, 2018

"Clearly, we are not happy, but we have to react. We are playing these final weeks of the season thinking that everything still depends on us. That means we have to win in Udine.

"If we win all three remaining matches, we're in the Champions League; we have to think like that."

However, Spalletti is wary of the threat posed by Udinese – winless in 13 Serie A matches and just three points clear of the relegation zone – having seen his side beaten by them 3-1 at San Siro in December.

"Udinese have a much stronger team than their position in the table would suggest and we saw they beat us earlier this season," he added.

"We must play with strong possession and try to push them back until we bring home the result."