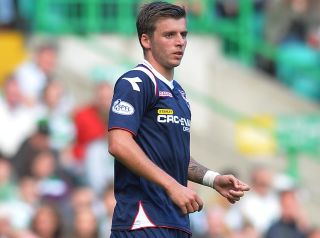 With Motherwell's clash against Inverness Caledonian Thistle postponed due to a waterlogged pitch at Fir Park, only the Global Energy Stadium saw action in the top flight.

Although the visitors had the better of possession, it was Derek Adams' side who had more chances on goal.

They had to wait to break the deadlock, however, with Carey's strike coming in the 88th minute.

The 24-year-old was on hand to slide home his third goal of the season after substitute Melvin De Leeuw had capitalised on a mistake in the Saints defence.

Michael Tidser, another County replacement, had a chance to extend his side's lead, but his powerful drive was kept out by Alan Mannus in the St. Johnstone goal.

Victory moves County up to 10th in the Premiership table, above Patrick Thistle, while St. Johnstone remain seventh, two points behind Hibernian.