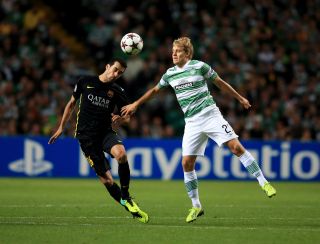 Manager Neil Lennon had blasted his side as "weak" following an embarrassing 6-1 UEFA Champions League defeat at Camp Nou on Wednesday.

And he got the response he was after at Celtic Park as Teemu Pukki's 29th-minute goal proved enough to maintain his side's seven-point lead at the summit.

Scott Brown and Joe Ledley linked nicely before the latter's cross was turned home by Pukki.

Liam Craig hit the post in response for Hibs and Paul Cairney wasted a golden chance to equalise from the rebound.

Northern Ireland forward Billy McKay – the league's top scorer – netted both goals in the second half for the victors, taking his tally to 12 for the season.

Hearts are still to wipe out the 15-point deduction handed to them at the start of the season, sitting on minus three after 16 minutes.

Free-scoring Dundee United made it five wins in a row, a run of form that has seen them score at least four goals in every match.

Fresh off a 4-1 triumph over Hearts, Jackie McNamara's side won by the same scoreline at 10-man Kilmarnock.

All five goals came in the final 30 minutes, as Keith Watson, Stuart Armstrong, Ryan Gauld and David Goodwillie netted for the victors.

And the day's other match between Partick Thistle and St Johnstone was abandoned at half-time due to bad weather.

Heavy rain, strong winds and puddles on the pitch saw the first half become a struggle, and once half-time had been reached, referee Kevin Clancy decided enough was enough.