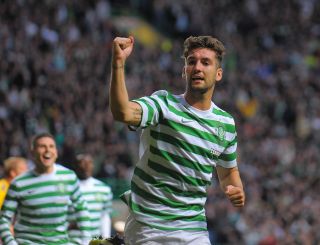 The reigning champions were frustrated at home by Terry Butcher's Inverness side, who top the league with 10 points from their four matches.

Inverness could feel aggrieved they did not secure a fourth-successive win though, as Celtic finished well to salvage a point.

An upset looked on the cards in the first half after Irish duo Aaron Doran and Richie Foran both netted.

Defender Charlie Mulgrew pulled a goal back for Celtic just before the break though, and the goal inspired the hosts in the second half.

Celtic – who were shocked 2-0 by Shakhter Karagandy in the first leg of their UEFA Champions League play-off on Tuesday – chased a result and eventually got their equaliser nine minutes from time.

The source was another defender, as Welshman Adam Matthews collected a pass, cut inside and fired a low strike beyond Inverness goalkeeper Dean Brill and into the back of the net.

There would be no winner in store for Celtic, but they could be content with a point given the precarious position they found themselves in during the first half.

St. Johnstone may have finished third last season but they were thrashed 4-0 by a rampant Dundee United at Tannadice Park.

Winger Gary Mackay-Steven – reportedly a transfer target of Leeds United and Blackburn Rovers – added a third in the 39th minute before Stuart Armstrong wrapped up the rout just after the break.

Hearts' bid to reduce their 15-point deduction continued with a 2-1 home win over Aberdeen.

Hearts – who are now minus eight – took the lead through Jamie Walker but they were subdued by Kevin McHattie's red card and Niall McGinn's subsequent equaliser.

Substitute Jordan McGhee came off the bench to score a dramatic winner with two minutes to play though, sending the Tynecastle crowd wild.