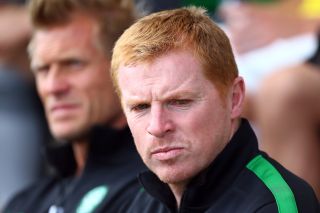 Paul Heffernan put the hosts ahead at Easter Road after 18 minutes amid claims of offside against the striker.

But James Forrest fired Celtic level from the centre of the penalty area 13 minutes from time, preserving their unbeaten start to the season, which now stretches to nine matches.

Meanwhile, Motherwell pulled level in second courtesy of a 2-1 home victory over Hearts.

Ryan Stevenson put the visitors ahead just after the hour mark, before Craig Moore and Shaun Hutchinson netted to leave Gary Locke's men rooted to the bottom of the league, still seven points adrift of nullifying their 15-point deduction.

Calvin Zola scored the only goal as Aberdeen kept up the pressure on the top three in a 1-0 triumph over Dundee United at Pittodrie.

The win leaves them two points behind Motherwell and two ahead of Hibs after their draw with Celtic.

Elsewhere in the division, Kris Boyd and Jackson Irvine fired Kilmarnock to their first win of the season in a 2-0 victory over Ross County, and St. Mirren edged a seven-goal thriller 4-3 against St. Johnstone - securing their first back-to-back three-pointers of the campaign in the process.