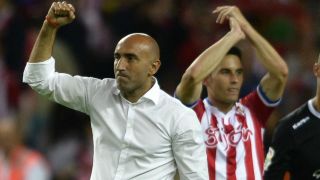 Sporting Gijon climbed out of the bottom three with an Antonio Sanabria-inspired 5-1 La Liga victory over Real Sociedad, ending a five-game top-flight losing streak in the process.

Carlos Carmona set the tone with a first-minute opener and Dani Ndi doubled the hosts' advantage before Carlos Vela struck back for Sociedad.

Abelardo Fernandez's men were thrashed 5-1 at Real Madrid last time out, but were on course to dish out a hammering of their own when Sanabria netted on the stroke of half-time.

The theme continued early in the second half as Sanabria doubled his tally and he made it nine for the season with his hat-trick goal in the 81st minute.