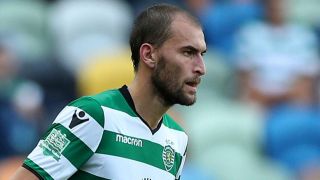 Bas Dost scored his first Champions League goals of the season as Sporting Lisbon beat Olympiacos 3-1 and kept their hopes of qualification for the knockout stage alive.

Dost opened the scoring after 40 minutes of a game in which Sporting allowed Olympiacos very few attacking opportunities and ultimately ended the visitors' hopes of staying in European competition this season beyond their final Group D game against Juventus.

Bruno Cesar struck three minutes after Dost to put Sporting in complete control at half-time and Jorge Jesus' side produced a professional second-half performance, with Dost heading in his second of the game and the campaign after 66 minutes before Vadis Odjidja-Ofoe scored a late consolation for Olympiacos.

In order to leapfrog Juventus into second place, Sporting must beat Barcelona at Camp Nou in their final game and hope the Italians fail to overcome Olympiacos in Greece.

That might seem like a near-impossible task but with Barcelona's progress to the last 16 already confirmed, Sporting will travel to Catalonia with real hope of clinching a famous victory.

Gelson Martins created Sporting's first chance of the evening in the third minute when he broke down the right wing and crossed to Andre Pinto, whose shot forced Olympiacos goalkeeper Silvio Proto to dive across his goal and parry the ball onto the post before the danger was cleared.

Bruno Fernandes should have done better 10 minutes later when an audacious reverse pass by Dost gave him a clear run into the box but he curled his shot high and wide of the target.

Having survived the early scares, Olympiacos grew in confidence and Leonardo Koutris tried his luck from 30 yards with a low, bobbling shot that almost caught out Rui Patricio but the goalkeeper dived on the ball.

Just as the tempo of the game was beginning to stutter, Cristiano Piccini embarked upon a mazy dribble all the way to the edge of the box where he fed Martins, who crossed for Dost to glance the ball into the bottom left corner of the net.

Three minutes later, Cesar had a shot charged down by Koutris, but the Brazilian won possession straight back and drove the ball low into the net at the near post to give Sporting a 2-0 lead at the break.

Diogo Figueiras had to be alert to clear Fernandes' cross off the line early in the second half and Sporting kept the pressure on, with Pinto heading Cesar's looping free-kick narrowly over the crossbar.

Fabio Coentrao flashed the ball across the face of goal and tantalisingly close to the on-rushing Dost after 65 minutes, and moments later it was 3-0.

Fernandes delivered a corner kick to the edge of the six-yard box where Dost out-jumped his marker and powered a header down into the bottom right corner of the net.

Jeremy Mathieu curled a brilliant 20-yard free-kick onto the roof of the net 20 minutes from time before Sporting's attack finally relented and Olympiacos took advantage when Odjidja-Ofoe slotted Figueiras' cross in from the edge of the box, the goal standing despite fellow substitute Seba being in an offside position.

However, that was the only blot on the kind of performance that might just earn Jesus' side a memorable result in Barcelona.