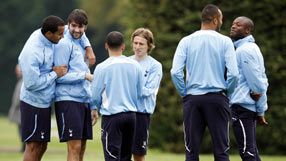 Tottenham were heading for humiliation when they trailed 4-0 at half-time in the San Siro with goalkeeper Heurelho Gomes sent off and though Bale's strikes were not enough to deny the hosts victory, it certainly changed the mindset of both teams.

"The goals were important," Redknapp told a news conference at White Hart Lane.

"Not just in giving players belief but had we come away from there as bad as it looked at halftime, when six or seven looked a real possibility, well we got some respectability.

"There were parts of the game even before that I thought we caused them problems... we just got off to an horrific start, giving the goal away, having the keeper sent off."

Inter lead Group A with seven points but Spurs are well placed on four and if they can get something from this match, progress to the knockout stage looks a strong possibility.

Redknapp said he had huge respect for the reigning European champions.

"We've had some tough games but this is the toughest of the home games," he said.

"Last year they were voted to have the best goalkeeper in the competition, the best right-back, the best midfielder and the best forward," he said in reference to Julio Cesar (absent injured this week), Maicon, Wesley Sneijder and Diego Milito.

"It's a very, very tough game but I fancy us. We're good at home, with the crowd, we have to set a high tempo and with two wide men that's an area where we can cause them problems."

Redknapp said key midfielder Rafael van der Vaart, who limped off against Manchester United on Saturday with what looked like a hamstring strain, might only have been suffering from cramp and had a good chance of playing after missing the San Siro game through suspension.

Definitely starting will be Bale, who has shot to international prominence since his San Siro hat-trick.

Currently rampaging forward from midfield, Redknapp said he saw the 21-year-old Welshman's long-term future as a left back.

Bale, who has gone from playing in the reserves 10 months ago to being described as the best in the world by some British newspapers, said he had always had confidence in his ability.

"The main thing for me was to be given regular football," he said. "I just needed a run of games to prove myself and when I got my chance I was prepared and ready to take it."

The Champions League has presented an even steeper learning curve.

"In the three games we've played we've learned a lot," he said. "We are still a young team and we are progressing and hopefully we can show some of that tomorrow night.

"It's important we learn from our mistakes in Italy - we can't start anything like as badly as we did there.

"We all knew it was going to be a difficult test but I don't think we were 100 percent ready and they opened us up.