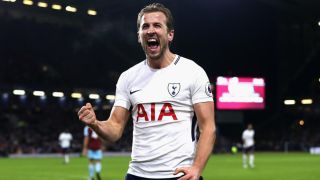 Kane enjoyed a stellar 2017, eclipsing Alan Shearer's record for the most Premier League goals in a calendar year with 37, while he also outscored Barcelona star Lionel Messi for club and country over the 12-month period.

His exploits have reportedly attracted the attention of LaLiga and Champions League holders Madrid, who are believed to be eyeing a move for the England international forward at the end of the season.

Pochettino and Tottenham have no intention of selling Kane, though that could change if the 24-year-old sought a move to the Santiago Bernabeu, which former Spurs duo Bale and Modric now call home.

"As Tottenham coach I would say that if Madrid come in with a bid, we don't want to sell, because he will stay here and they will have to understand that," Pochettino told El Chiringuito in an interview from December 19, published on Wednesday.

"If the player asks you to leave, as happened with Modric and Bale... We'll see what happens. Today, that has not happened.

"I hope that Harry Kane can be here for many years and provide many goals, wins and a title. That is what we want."

Kane is the leading scorer in the Premier League this season with 18 goals as Tottenham sit fifth in the table ahead of Thursday's visit of London rivals West Ham.