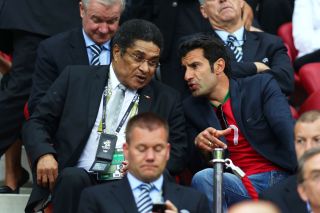 The Mozambique-born striker scored 733 goals in 745 professional matches and is considered as one of the sport's all-time greats.

Here we look at the reaction of the football world to the death of a man whose many achievements include finishing top scorer at the 1966 FIFA World Cup:

"The king! Great loss for all of us! The greatest!" - Luis Figo, Portugal's most capped player, tweets his sadness at the news.

"One of the greatest football players ever has passed away. My friend Eusebio died last night. My thoughts are with his family" - German football great Franz Beckenbauer shares his sorrow on Twitter.

"He was not only a great inspiration but also an important figure in upholding the values, principles and feelings of football, even after finishing his career" - Portuguese coach Jose Mourinho speaks to state broadcaster RTP.

"Sad news that Eusebio has died. One of the greats of his generation. Could play and strike a ball like very few others. #RIP" - England legend Gary Lineker takes to twitter to hail Eusebio.

"Respect to a man who meant so much to the game I cherish. Eusebio, one of the all time greatest, may he Rest In Peace" - Manchester City and Belgium midfielder shows his respect on Twitter.

"Sad news that Eusebio has passed away, he was a true legend, a fantastic ambassador to football, a gentleman to the core. R.I.P. Sir" - Peter Schmeichel, who won 129 caps for Denmark, on Twitter.

"Sad to hear that Eusebio has passed away. 733 goals in 745 appearances will always mark him down as a true legend of the game. R.I.P"- Former England striker Michael Owen on Twitter.