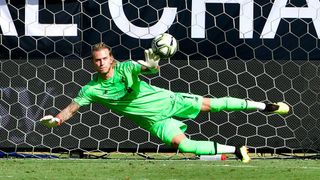 Mohamed Salah has told Loris Karius to ignore the hate on social media after another blunder from the German goalkeeper.

Karius could only parry a shot from Christian Pulisic in Liverpool's pre-season friendly with Borussia Dortmund on Sunday, allowing Jacob Bruun Larsen to tap in the rebound and complete a 3-1 win for the Bundesliga side.

That error came after the 25-year-old made two costly mistakes in the Champions League final loss against Real Madrid – Karius inexplicably gifting a goal to Karim Benzema and making a mess of a swerving Gareth Bale effort.

It was later revealed Karius suffered a concussion from a collision earlier in the match in Kiev, but the mistakes have kept coming in pre-season – including one against Tranmere Rovers – and Alisson has been signed from Roma as Liverpool's first-choice keeper.

Karius posted a message via Instagram stories on Sunday which read: "To those who take joy in seeing other people fail or suffer, I feel for you."

And Salah has advised his team-mate to block out any abuse and forget what has happened in the past.

He posted: "Stay strong Karius, it has happened to the best of players. Ignore those who hate."

Stay strong Karius, it has happened to the best of players. Ignore those who hate.July 23, 2018