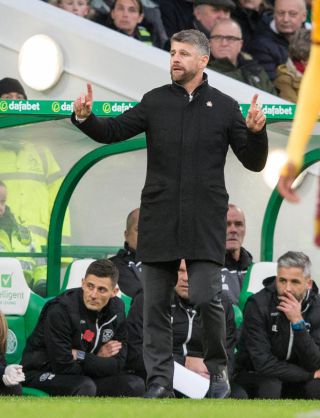 Motherwell manager Stephen Robinson wants the club to build for the future after they cleared their external debts.

The club received loans totalling £80,000 from five individuals to help pay off former owners John Boyle and Les Hutchison in November and that sum has been paid off from the recent sale of James Scott to Hull.

The fan-owned club’s majority shareholder, the Well Society, is owed money but is unlikely to seek it back, leaving the Fir Park board free to make more long-term planning decisions.

Robinson is especially keen to see the club’s training facilities improve with the long-term goal being to own their own training ground.

And he will keep pushing for improvements after playing a major part in helping the club pay off more than £2million in debts in three years.

“It’s massive for the football club,” he said. “You are always having things hanging over your head.

“Every time we sold a player or get to a cup final, it was always ‘we have to pay off the debts again’, debts that a lot of people here weren’t involved in at the time.

“Historic debts kept holding the club back, in my opinion, and I think now it’s time to build again, to invest in the playing squad and the infrastructure, the ground, the training ground.

“Our training ground and academy, as much as we have done so well from it, it needs to be upgraded massively to continue to attract players from it and go forward.

“As a manager I won’t stand still, I want to keep trying to push the club forward, Alan Burrows wants to keep pushing the club forward as do the board. I am sure they will have a plan for the next five to 10 years.

“They have done what they said. Fantastic credit to everybody involved. As a football club we have got a lot of money from selling players and being relatively successful on the pitch as well, backed by the Well Society.

Robinson does not expect his playing budget to increase but hopes to reap the rewards of investing in youth after selling academy products such as Stuart McKinstry, Jake Hastie and Scott in recent months.

“It might take a little while for them to come through but we have boys in the background who I think might come through next season,” Robinson said.

“I think they will need another six months of football, some we have put out on loan, some we are keeping to develop.”

Robinson’s immediate priority is Wednesday’s Ladbrokes Premiership encounter in Perth against a St Johnstone side who have lost only twice in 12 games since losing 4-0 at Fir Park.

“They have gone on a decent run,” Robinson said. “They have similar players, they have not changed the way they play.

“They are a tough team to play against. They will put balls down the side of you, they will be aggressive in midfield and will go into the game with confidence.”