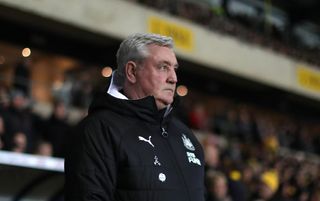 Steve Bruce endured a rollercoaster of an evening he claimed sums up life at Newcastle as they secured extra-time victory over Oxford in their FA Cup fourth-round replay.

On course to coast into round five for the first time since 2006 courtesy of Sean Longstaff and Joelinton goals, the Magpies then conspired to seemingly throw away a clash at West Brom.

Oxford were the better side in the additional 30 minutes but substitute Allan Saint-Maximin struck a stunning winner to send the Premier League team through.

“Well if there was ever an FA Cup that grabbed hold of you then tonight was it,” said Bruce.

“I thought we deserved it. I know it was a hairy cup tie and great for the neutral.

“(It was) bloody awful for myself and the Newcastle fans but it wouldn’t be Newcastle without a story so lets go to West Brom and take them on.

“I think it is significant for a club like ours to get into the fifth round, I know what it does for the club, the city and the supporters.

“We are in the next round, we have made hard work of it against Rochdale and Oxford but I think we fully deserved it.”

Joelinton struck the second of the game despite hitting the deck through injury moments before.

He was replaced by Saint-Maximin soon after and Bruce fears he may have cracked a rib as his injury crisis shows no sign of abating.

“If you are the manager of Newcastle you are going to get criticised, the problem we have had I’ve never know anything like it,” he said.

“It is quite remarkable that we have been able to battle on and they showed resilience.”

While his predecessors have often put Premier League survival over deep runs in the cup, Bruce is keen to at least aim to end a 51-year wait for silverware at St James’ Park having had his own love affair with the FA Cup – winning it three times as a player with Manchester United and taking Hull to the final in 2014.

“It is not about me any more,” he added.

“I have been lucky enough to be there a few times, the FA Cup is still a huge, huge occasions in this country and it rekindled it for me when I got back there a few years ago with Hull.

“I told myself then I was never going to play a weakened team so let’s see how far we go.”

Oxford boss Karl Robinson was left frustrated by the outcome but – not for the first time in recent history – felt his side were more than a match for top-flight opposition.

“It is frustrating obviously, it is what it is unfortunately,” he said.

“I thought we outplayed them, I don’t know what the stats are but we created good chances, even in the first half.

“Their first goal is a worldie and the third is an outstanding finish. It is all ifs and buts unfortunately but I am really proud of my players, we showed we could cope with big nights.

“We are a League One team but I think you couldn’t tell which team was which. We were open, expansive and aggressive but it just wasn’t to be.”