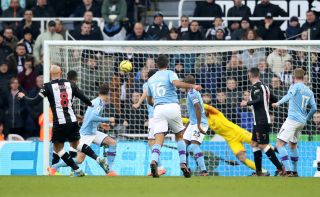 Steve Bruce has challenged Newcastle to replicate their Premier League performances against Manchester City as they bid to pull off an FA Cup shock.

The odds may be heavily stacked against the Magpies as they head into their quarter-final clash with the holders at St James’ Park on Sunday evening, but they have previous against Pep Guardiola’s men, albeit in front of raucous full houses on Tyneside.

Jonjo Shelvey’s fine late strike secured a 2-2 league draw with City in the north-east in November, 10 months after Matt Ritchie had fired Newcastle to a 2-1 victory from the penalty spot under Bruce’s predecessor Rafael Benitez.

The current head coach said: “The mindset has got to be the same. Whenever you play Manchester City, you know that you’re going to have to be at your best.

“They’ve got some of the best players in the world performing and that’s what makes them pretty formidable, especially the way they play.

“Whether it’s the FA Cup, whatever competition it’s in, Manchester City these days are the real deal, so we’re going to have to be at our best.

“We managed to be somewhere close to it earlier in the season, let’s hope we can reproduce that and see if we can pull off a shock.”

The Magpies returned to action after football’s lockdown with an impressive 3-0 over European hopefuls Sheffield United, but had to make do with a 1-1 draw despite taking the lead against lowly Aston Villa on Wednesday evening.

On paper, a third home game in eight days represents the most significant test yet, but they are unbeaten in five games in all competitions and have high hopes of extending that run, tired limbs permitting.

Bruce said: “We’ve put a decent little run together out of lockdown to come and get four points out of six. We might even have made it six out of six, but a rare defensive lapse unfortunately and we conceded a poor goal.

“But overall, I’ve been very, very pleased with the way we are.”

Midfielders Isaac Hayden and Matt Ritchie both limped off with soft tissue injuries in midweek and will be assessed before Bruce finalises his starting line-up.