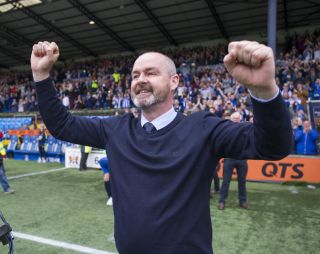 Scotland-bound Steve Clarke bid an emotional farewell to Rugby Park after steering Kilmarnock to their first third-place finish in 53 years.

The Scottish Football Association are set to make their move for the former West Brom and Reading boss on Monday as they look to name Alex McLeish’s successor as Scotland boss.

But the 55-year-old will bow out on a high in Ayrshire after Sunday’s 2-1 win over Rangers ensured his side pipped Aberdeen to book a guaranteed Europa League slot.

Clarke – who did not speak to the media either before or after the game – did address the jubilant Killie faithful from the centre of the Rugby Park pitch after Eamonn Brophy tucked home a last-minute penalty to send Kilmarnock on their way to their first European adventure since 2001.

And while he did not directly mention whether he would be moving on, he did hint his time at Rugby Park was up as he admitted his regret at not delivering a trophy.

He said: “I think it’s important on a day like this, on the last day of the season, (to say we have) a record points total, the first time since 1966 we have finished in the top three.

“We have gone better than last season. The manager seems to get the credit but I couldn’t do anything without my staff. Without the players, this football club doesn’t operate. Because these guys have been absolutely magnificent over the past 20 months.

“They have to do it on the pitch and they had to do it today because we wanted to finish third.

“We didn’t want Aberdeen to be third, we didn’t want to rely on Hibs doing something. We wanted to do it ourselves here, on our pitch. This is our pitch, this is Kilmarnock.

“You have the best owner (Billy Bowie) I have ever come across in football. And remember, I worked for Mr Abramovich. I think Billy’s richer.

“But the most important thing in any football club in the world is the supporters. When I came here, we didn’t have so many. We had a disconnect between the support, the board, the players. There was no togetherness.

“I said when I came in that together we are stronger. In my time at Kilmarnock Football Club, I’m sorry I didn’t win you a trophy.

“But I am telling you now, as I stand here in front of three stands of Kilmarnock supporters – bye, bye Rangers and next season I’m sure it will be bye, bye Celtic as well.

“This is Kilmarnock. This belongs to you. This is the most important thing. I said no trophy but I take this – this is my trophy. Thank you.”

Defeat for Gers mean they finish nine points behind Celtic and boss Steven Gerrard admitted individual errors cost his side.

Alfredo Morelos grabbed his 30th goal of the season as he cancelled out Chris Burke’s opener but Borna Barisic handed Brophy his chance to be the hero when he dragged down Stephen O’Donnell in the box.

Speculation continues to mount that Morelos will be sold this summer but Gerrard insists if he does go it will not be on the cheap.

The Rangers boss – who responded “watch this space” when asked about reports he has agreed a three-year deal for free agent forward Greg Stewart – said: “It is a great finish from Alfredo, a poacher’s goal and his all round level this season deserves 30 goals.

“I’m pleased for him. I’m hoping he’s learned a lot from the last five weeks. That is what we should be talking about with Alfredo – his goals, his play – rather than talking about the discipline side.

“It’s good for him to go away and remember another goal than the last four weeks.

“He is on a four-year contract. We have had one bid for Alfredo since I’ve been Rangers manager and it was for three million euros. Would you expect to see him in the summer if you were me?”